How to budget for delayed GST or VAT

Revenue is recognised on the profit and loss / income statement, but GST (or VAT) is required to be recognised only in the month in which the cash is received.

Automatic GST / Automatic VAT / Automatic SALES TAX – normally this box is checked. Most users will never change this setting. In this case we want to enter the GST / VAT / SALES TAX amounts manually, so uncheck this box. See picture: 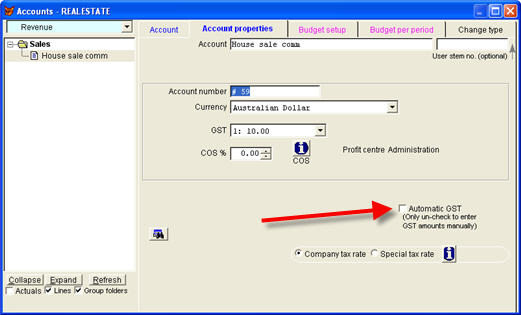 When Automatic GST or VAT is turned off, the GST / VAT will not be added automatically. Instead, the Budget per period page will display an extra column for entering the GST / VAT / SALES TAX amount yourself. See marker 4 is picture 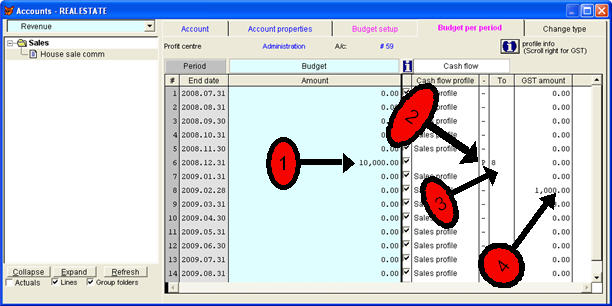 GST amount or VAT amount or Sales Tax amount – this column is normally not shown. The only circumstance in which it appears in the grid on the Budget per period page is if the user unchecked the Automatic GST/VAT/SALES TAX checkbox on the Account properties page.

The picture is now explained using the markers 1 to 4:
1.
*An amount of 10,000 is recognised as revenue in period 6.
* Notice the P. The ‘P’ is used when you want the cash flow to be received in a Nominated period.
Note: we are using the P option here because it clearly explains the process, and is often useful when entering the GST or VAT manually.
*The Nominated period is shown in the To column. In the example, 10,000 of revenue recognised as income in period 6 will be paid in period 8. So 10,000 cash will be collected in period 8.
*THE GST or VAT amount is shown in period 8. So the GST (or VAT) of 1,000 is charged in period 8.

Note: The usual sales profile could also have been used (“-“) to show when the income is recognised. The GST or VAT would still have been entered into the column as shown in 4.

Here are the results for this example: